Sheldon Adelson has officially pulled out of his portion of funding for the new Las Vegas Raiders stadium, meaning Mark Davis will need to find an extra $650million from somewhere if the move is still to go ahead.

It seems the Raiders were prepared for this all along though, as the relocation papers that were filed to the NFL on 19th January did not include Adelson’s contribution. Since then, the Raiders have declared they are willing to take on the extra $650million investment themselves (taking their contribution up to $1.15billion) whilst enlisting the help from Goldman Sachs investment bank. Governor Sandoval was quick to assure people that the proportion coming from the public fund will not change following this announcement.

This is a significant development and one that comes with a few questions. Firstly, are Goldman Sachs going to have someone ready to step into Adelson’s shoes and invest straight away? You would have thought so if Davis has turned his back on Adelson, a man who played a pivotal role in the talks getting to where they are now, so easily. Secondly, how are the other owners going to take this significant and questionable change so late in the process? Theoretically the only thing standing in the way of the Vegas Raiders becoming real is the owners vote in March, and who knows to what degree this change will have on their opinions.

This change does mean that the Raiders don’t have to request the team owners to waive a rule prohibiting casino operators from having ownership roles in teams. That is a significant development in itself and probably the biggest hurdle (other than the owners vote) cleared, depending on who the next investor turns out to be.

No doubt there will be more twists and turns along the road to the Vegas Raiders, but it seems Mark Davis is doing everything he can to roll with the punches and get this relocation done.

Will the Raiders change their name if they move to Las Vegas?
No

Will the Raiders change their famously recognisable silver & black colours if they move to Las Vegas?
No

Will the Raiders change their logo if they move to Las Vegas?
No

Although the Raiders have filed papers to relocate, a team spokesperson told USA Today that “No rebranding is under consideration”.

And that sound you can now hear is thousands of Raiders fans sighing with relief.

Raiders fans love the silver and black and none of us want it to change. The same goes for the logo, and we feel confident saying it won’t. The silver and black is the Raiders history and its heritage, with them potentially being the only team to have never changed their colours throughout their entire history. The most colour they have ever seen is a tiny bit of yellow on the arms and outlining the numbers in the early 1960s!

Those of you keeping in tune with all the recent relocation news will know the Chargers recently jumped ship and have declared they are going to move to Los Angeles, just one year after the former St Louis Rams did the same. It’s safe to say they did not enjoy a good first season in their new home town, going 4-12, so the once formidable Chargers will hope to avoid that same luck. Unfortunately for them it didn’t start so well.

When the move was announced on Thursday 12th January 2017 the team took to twitter to introduce people to what their new logo would be. It was met with heaps of jokes, memes and basically anything negative you could possibly say. The picture below-left is the first announced Chargers logo, the other picture below-right is the Los Angeles Dodgers logo (who have been based in the city since 1958): 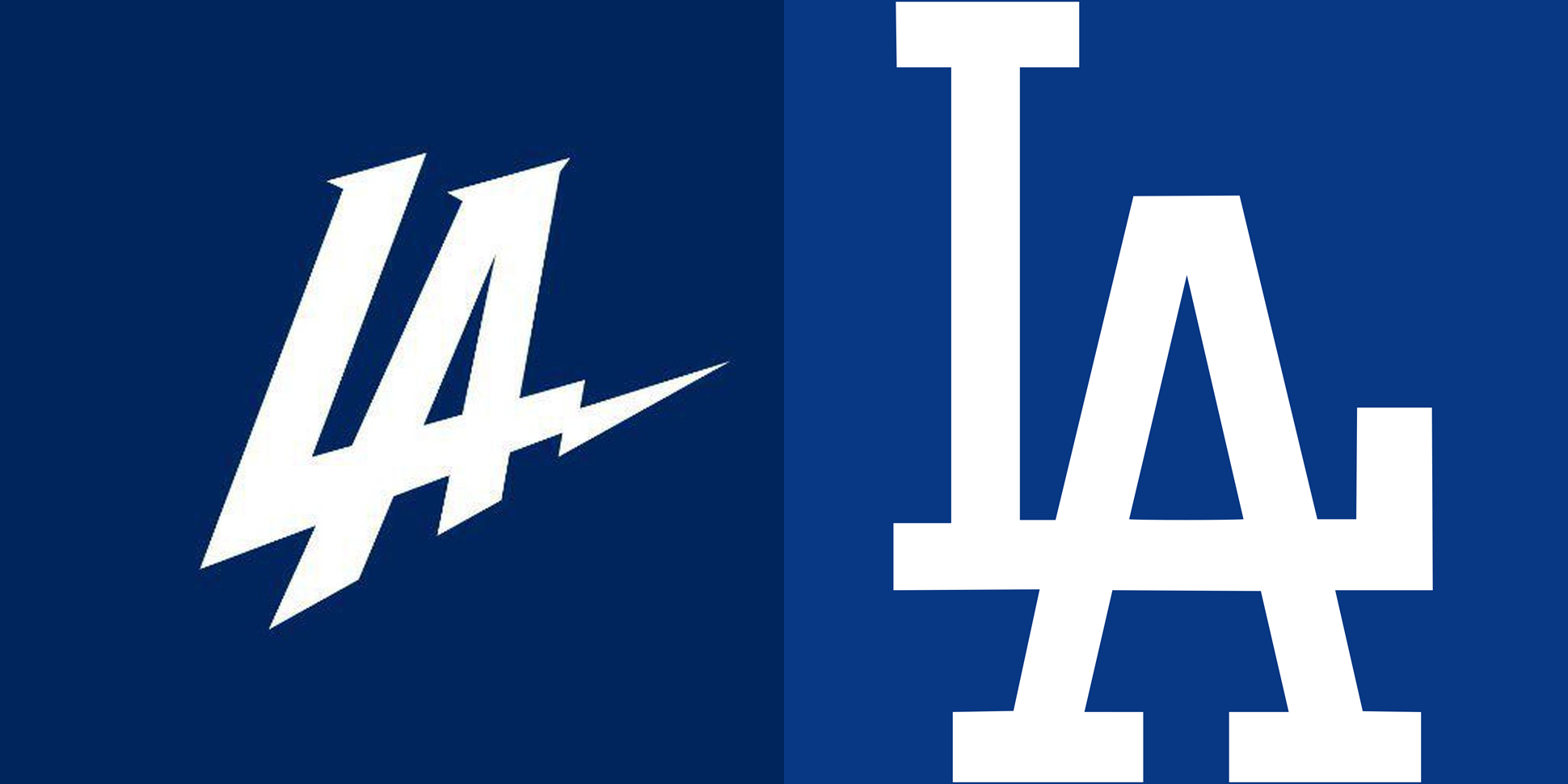 We will let you make your own comparison! After the abuse the team received to this new logo they decided to release another new, revolutionary design….. 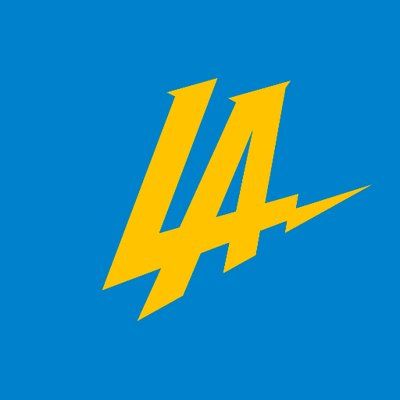 Not exactly a big over-haul hey? Since then the Chargers have changed a third (and what looks like final) time to their current logo which can be found on the team’s twitter page.

The Chargers may have turned their move to LA into a rebranding farce, but the history behind the Raiders cannot be messed with.

Long live the silver and black.

Where Oakland failed to make any serious progress in their efforts to keep the Raiders, Las Vegas actively embraced the possibility of the team moving to Sin City. And now we know Mark Davis wasn’t calling Oakland’s bluff. Perhaps prompted by The Chargers’ decision to move to LA last week, thus cutting off one of the Raiders’ options, the papers were filed well in advance of the February 15th deadline for doing so.

An official NFL statement read, “Today, the Oakland Raiders submitted an application to relocate their franchise to Las Vegas, as is provided for under the NFL Policy and Procedures for Proposed Franchise Relocations.”

That application now gets reviewed by various committees and league grandees before going to what really matters, a vote of NFL team owners.  That vote could come as early as March 2017.

The Raiders require 24 votes from other team owners for the move to be approved. 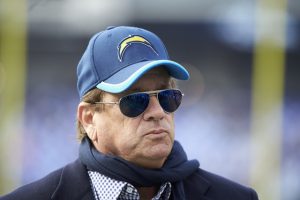 Dean Spanos, owner of the San Diego Chargers, called a meeting early this morning to inform the staff of the team that he plans to move the team to Los Angeles for the 2017 season. Committee meetings took place on Wednesday where the Chargers were just not a priority topic, and the league offered no additional money to help with current stadium efforts. Those close to the situation say the meetings were the last possible opportunity to find some solution. Nothing came, so the Chargers are moving on.

It is far from set in stone, as there are still multiple hoops that need to be jumped through before the moving trucks are packed. Spanos has done nothing official yet; he hasn’t informed city officials in Los Angeles or San Diego of his intent to move and has not filled in an official relocation letter. Should Spanos follow through with his plan then the Chargers would need to be out of San Diego by July 1st. Considering a practice facility and office space has already been leased in California by the team, they could be out much earlier than that.

It’s fair to say that the Chargers potential move to Los Angeles has been talked about less than the Raiders move to Las Vegas, but it is still a significant league topic nonetheless. The Rams moved to LA this year and had a horrendous season, so it would be a big news if a team of the Chargers calibre were to make their new home the City of Angels for 2017.

The Raiders are Back according to coach Del Rio.  “The Raiders are back,” he told the locker room minutes after The Silver and Black’s loss to the Houston Texans at the NRG stadium in their first playoff game since 2002, “just not back where we want to be just yet.”

He went on to praise the team for their 12 wins in the regular season and on the sacrifices they’d all made.  “Your can hold your heads high,” he told the players.

Given what the team have achieved on the field this season, and the progress the team is making off the field toward a move to Las Vegas, there’s few fans who would disagree, The Raiders are well and truly back.  At the start of the season, we’d have all taken a first playoff-game in 14 years.

Vocalising what many believe and all of us hope, Del Rio announced that the future of the franchise is bright. “We are heading where we need to be heading,” he said urging the group to stick together, “This is just the beginning. We are not ready to stop”.